The finite element, parallel PN-transport solver based on domain-decomposition PARAFISH

The increasing computer power nowadays available in HPC pave the way for the development of full parallel codes that solve the Boltzmann transport equation with less approximation using transport methods instead of diffusion methods and domain decomposition to take profit of the HPC-architecture. Hence, the PARAFISH code is being developed and validated at KIT for high-fidelity simulations of reactor cores as it can be done with Monte Carlo solvers.

PARAFISH (PARAllel Finite-element Spherical Harmonic) code is a 3D parallel neutron transport code written in C++ being developed at the Karlsruhe Institute for Technology to solve the static Boltzmann Transport Equation (BTE) in order to describe the core neutronics. At present, two kind of simulations can be done: fixed-source and criticality calculations. PARAFISH solves the so-called even parity formulation of the BTE, where only the even part of the angular dependence is computed. The spatial discretization is based on finite elements for the spatial dependence, and spherical harmonic expansions for the angular dependence. In  addition, an algebraic non-overlapping domain-decomposition method is introduced along the lines of modified Schwarz methods.

The code is under development and validation phase for static simulations. Further improvements will be focused on:

Analysis of the TAKEDA 3D problem with axial heterogeinity 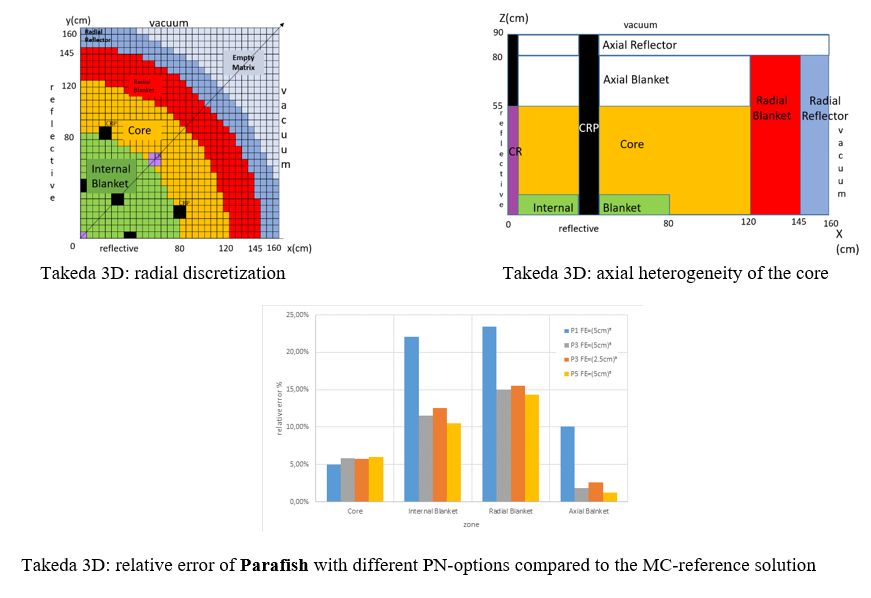